half of her life


Welcome to the Carnival of Weaning: Weaning - Your Stories
This post was written for inclusion in the Carnival of Weaning hosted by Code Name: Mama and Aha! Parenting. Our participants have shared stories, tips, and struggles about the end of the breastfeeding relationship.
I often joke that a lot of my parenting 'style' comes from being lazy.  When my first was 2 months old, someone asked me if i was into all that 'attachment parenting' stuff...  i kind of mumbled and changed the subject.  I had no. idea. what she was talking about! I went home and googled 'attachment parenting.'  I still remember reading this Dr Sears article and thinking .. 'yeah, i guess i do that.'   It was much later that i read more and more and though i still feel like that is me - i just don't put that much thought into it!  I do what feels right, which is often what is easy [see why i call it lazy?].  That became my 'thing.'  It seems like that shouldn't be a 'thing' .. that everyone should do it - but with the pressure from family, friends, society etc.  It seems many parents do what they feel like they should do even if it feels wrong.

When it came to breastfeeding, things have always been a little different... I'll admit, i felt strongly about it pretty early on, i don't know if it was brought on by a need to defend my choice or what but as soon as we got the hang of it (about 6 or 8 weeks) I started googling 'natural age of weaning', and found La Leche League meetings, and worked on a plan.  All I knew was that i didn't want to stop.  I didn't want to stop at 6 months or a year.  I didn't ever want to make my baby give up nursing.  So, I gathered my ammo and built my support network and nursed my baby in this mental fortress I had created for myself. [i never really had to shoot at anyone.. by the way]  That lasted a couple short months until we started solids.  UGH.  Obviously solids have a lot to do with weaning, but lets just say, by 8 or 9 months, she was eating food.  How we got there, is not important, and with my 2nd and 3rd and any potential future babies i did not and will not stress about solid food. ("baby led weaning", baby!)  From there on out, things happened pretty gradually .. and i don't mean over a few weeks - we're talking months and years.  We did hit a bump in our nursing relationship when i got pregnant with my 2nd baby.  Of course, I was told to wean her by my OB at our first appointment.. and by this time i had perfected the 'nod and smile' technique to avoid more pressure to follow any advice i didn't agree with.  By about 12 weeks (my nurseling was about 19 months old) my milk was nearly dried up due to pregnancy hormones.  My baby, understandably, thought nursing all night along might bring it back.  Well, that was a no go - plus as is often the case, my nipples were very sore and nursing was just not a pleasant experience anymore.  I still, admittedly, freaked out at the thought of weaning my baby... [err. toddler].  I did, however, make the decision to try night weaning.  My 19 month old first born was very verbal, we talked about it and decided the 'milks' were very tired and needed to sleep while it was dark outside.  Now, when it came to waking up in the night and find sleeping milks... she was not very happy.  She was mad at me - she was not afraid or alone, but she was mad.  I know she understood, at least what was going on, if not why, because I told her the milks were asleep and she moved on to cuddling and crying with daddy, and the next night she was a little less mad, and suddenly she was only nursing at bedtime.  Oh. No. pregnant me loved [needed!] the sleep but suddenly my baby went from nursing nearly all night long, and at nap and bedtime - to just nap and bedtime! Wow.  what was gentle and gradual about that?!  Well. desperate times call for desperate measures.. and i have no regrets about night weaning.   My 3rd child is now 20 months old, and you couldn't pay me enough to night wean her now, or even to cut back on nursing at all, there is just no need for it! We are happy, i am NOT pregnant and we both love to sleep and cuddle and nurse all night long.  Anyway, back to my original baby.  She nursed to sleep, twice a day.. until at 22 months she dropped her nap [GASP].  I know she was so young [funny how this shocked people, but they would have been even more shocked to learn that she was still nursing to sleep at this age] but she went to bed earlier and never looked back.  Then we only nursed at bedtime..  at almost 26 months baby brother was born!  We didn't nurse for a couple of days while I was in the hospital, and it would have been pretty easy to just wean - or so everyone told me.  But I didn't want to [back to that 'what feels right' thing], the first night I was home i put my [suddenly MUCH bigger] baby to bed, just like we always did.  Or i tried.  She didn't go to sleep that first night, she was way to excited that her baby brother had 'filled up the milk.'  [That is my favorite memory of nursing her as a toddler. right there.  the look on her face when she realized the milk was back. it makes me laugh and cry just to think about it.]  So, the 2nd night, back to sleep as usual.  And it went on like that ..  we nursed to sleep and sometimes extra when she was sick.  She nursed in recovery after she had her tonsils taken out at 2 yrs 9 months [though she quickly realized that nursing hurt and she stopped for a whole week!].  After the tonsils came out [this, is another topic that I could write a whole post on] her sleep and attitude and growth improved and she seemed to quickly outgrow the need to nurse every night..  between about 2 yrs 10 months and 3 yrs 1 month she stopped asking every night, then she only asked every few days, then once a week, then not at all.  I actually remember the last time she nursed, and i am very thankful for that.. it was April 12th, 2009.  She was one day shy of 3 yrs and 1 month old.  About 6 months before that date, i had a complete emotional breakdown in a LLL meeting about weaning .. i knew it was coming [sometime soon anyway] and i was so sad and so afraid of what it would be like on the other side.  I don't remember what anyone said in that meeting, but i know they understood and that was all that mattered.  When we nursed that last time, and when i realized it was the last time..  it wasn't sad.. no one cried.


Now she is 6 years and a couple months old .. That means that just in the last few weeks she has been weaned for more of her life than she was nursing.. I can say, right now, that my baby nursed for half her life - to say that it goes by too fast is just not enough to describe what actually happened here.  I blinked and she is 6.  The time she nursed will just get smaller and smaller.. 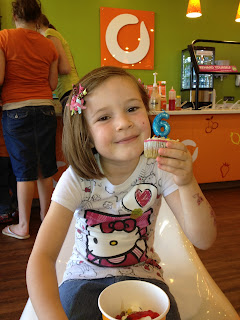 Thank you for visiting the Carnival of Weaning hosted by Dionna at Code Name: Mama and Dr. Laura at Aha! Parenting.

Please take time to read the submissions by the other carnival participants (and many thanks to Joni Rae of Tales of a Kitchen Witch for designing our lovely button):